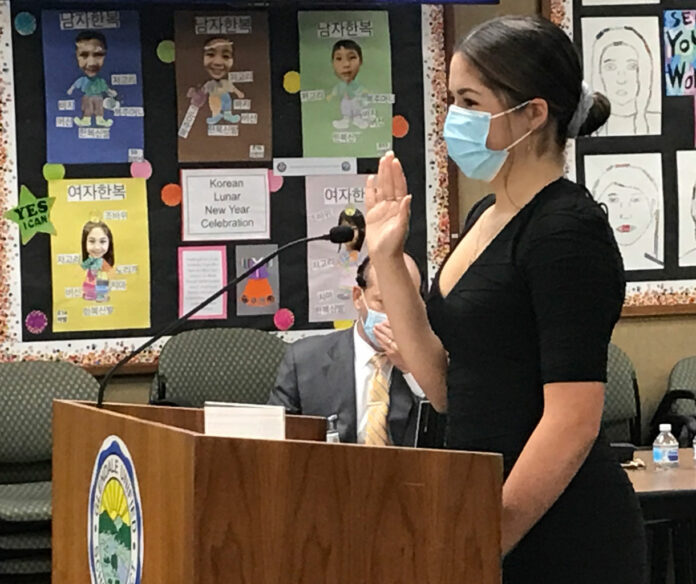 The student body at the Glendale Unified School District can officially turn to high school senior Kayla Rodriguez when it wants questions or concerns directed to the Board of Education.
Rodriguez, Associated Student Body president at Glendale High School, was officially sworn in as the student representative on the school board last week. As she took the oath while maintaining a social distance from the board and wearing a face mask, she admitted to being caught up with nerves at that moment.

“I am so honored to be the voice of all the students and hear them all out,” she said. “I’ve been working since freshman year, coming to these meetings and seeing all of you guys. I was 14 years old and now I’m 17, standing up here kind of shaking for no reason. I’ve actually had a loss of words; that usually does not happen.”
At any rate, Rodriguez was able to laugh off the jitters, show her gratitude to board members and introduce her family last week before returning home. She will attend board meetings virtually via Zoom, with Superintendent Vivian Ekchian warning Rodriguez, partly in jest, that plenty of work awaited her.
“I already got handed two giant binders,” Rodriguez replied.
At GHS, Rodriguez was class president for her freshman, sophomore and junior years and played soccer for the Nitros; additionally, she is active in a number of clubs and organizations. She said she plans to study business in college.
School board President Armina Gharpetian, in congratulating Rodriguez, offered a wry comment regarding the new representative’s responsibilities.
“I always say there’s no pressure, but you’re going to represent 26,000 students!” Gharpetian said.