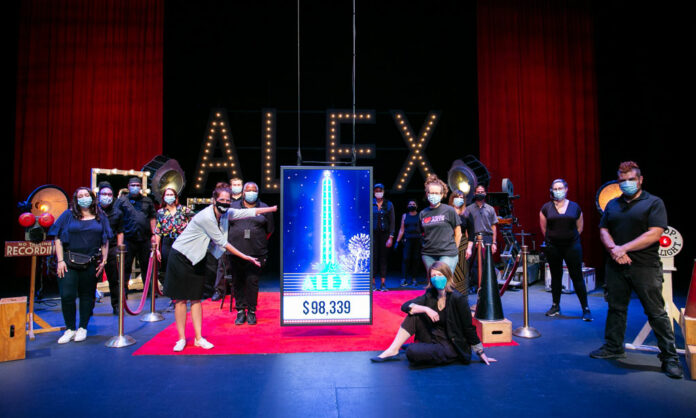 The heat was on at the Alex Theatre on Saturday, when the venue’s nonprofit management company Glendale Arts surpassed its $95,000 fundraising goal in honor of its 95th birthday milestone, which was celebrated with a 12-hour program presented in a telethon format and livestreamed and telecast on multiple platforms.
At the close of the Alex95 event, $98,339 had been raised for the preservation of the city-owned Alex Theatre and the programs and services offered by Glendale Arts, with donations continuing to come in from supporters. The performing arts and entertainment center has reduced its staff since the mandated lockdown took effect in March, but it remains committed to its mission of bringing the community together through the arts and entertainment while continuing to maintain the historic building.
Alex95 hosts journalist Palmira Perez-Najarian, former NBC4 weathercaster Fritz Coleman, and comedians Alonzo Bodden, Mary Basmadjian, Matt Kirshen and Michael Rayner entertained viewers throughout the program, sharing the wonder and promise of the Theatre with their own special connections and memories.
Program highlights included a guided tour of the Alex, video greetings from performers and artists, and familiar faces from the community, including honorary committee members and area elected officials, including Congressman Adam Schiff, state Sen. Anthony Portantino, Assemblywoman Laura Friedman, Glendale Mayor Vrej Agajanian and City Council members Ara Najarian, Paula Devine, Ardy Kassakhian and Daniel Brotman.
“We’re thrilled with the outpouring of support for Alex95, which reaffirms the community’s love for its iconic cultural and architectural landmark,” said Glendale Arts Managing Director Nina Crowe.