By Vrej Agajanian
Special to the News-Press

On April 24, 105 years ago, 1.5 million Armenian men, women and children were murdered by the Ottoman Empire. Year after year on this day, hundreds of thousands of Armenians around the world usually join together to demand justice and pay respect to the victims of the Armenian Genocide. However, due to the extraordinary circumstances created by the coronavirus pandemic and in this time of social distancing, April 24 was very different than in years past: No marches and no large public gatherings.
In annual remembrance ceremonies, Armenians close their businesses or take days off from their work to participate in the ceremonial march, hold vigils at genocide monuments, and visit the graves of their grandparents. In Glendale, hundreds of people would typically gather for a commemorative event at the Alex Theatre. But this year, we found ourselves adapting commemorative ceremonies to adhere to precautionary measures in place to prevent the spread of the coronavirus — creating alternative ways to join as a community and remember the systematic expulsion and mass killing of Armenian people 105 years ago.
O

rganizations that typically hold commemorative events canceled those and, instead, asked communities to tune in to 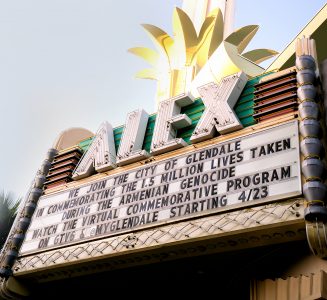 live-streamed commemorations, virtual candlelight vigils, and to donate meals to the hungry. The City of Glendale’s Armenian Genocide Commemorative Committee with Glendale’s GTV6 crew was able to produce and live-stream a video that highlighted cultural performances from the commemorative events usually held at the Alex Theatre, as well as messages from local, state and congressional leaders. The City of Glendale also aired a feature documentary, “What Will Become of Us,” produced by Stephanie Ayanian. 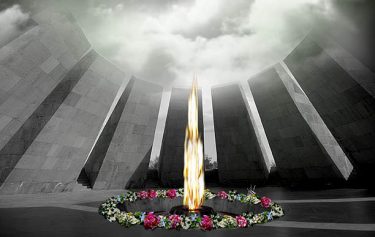 We remember the victims all the time and everywhere, no matter where we are in the world; whether we are together or apart. The in-person gatherings, live-streams and humanitarian efforts were important to continue fostering community solidarity. Another difference this year was that a few months ago, the U.S. Congress recognized the 1915 events as genocide for the first time in history – a monumental achievement.
Genocide is not only a crime against a particular group of people, it is also a crime against humanity. If we choose not to remember or learn about past genocides, we won’t have the knowledge we need to help prevent this type of tragedy and crime against humanity from happening again. Nobody deserves to be punished for their race or what they believe in.
April 24, 1915, is a date we will never forget. This year, we stayed home and we remembered. We thank the community for joining us virtually to reflect upon the lives of the 1.5 million Armenian people who senselessly lost their lives in an act of genocide, while marking the passage of Congressional resolutions.

Vrej Agajanian is mayor of Glendale.

Facebook
Twitter
WhatsApp
Previous articlePortantino: ‘Every Idea’ on the Table for Recovery
Next articleLocal Resident Plays Key Role at USC-VHH During Pandemic